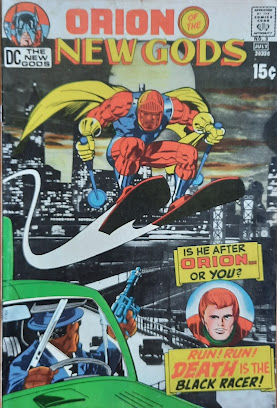 It would be tempting to simply see the Black Racer as Jack Kirby doing the Silver Surfer at DC but Vietnam veteran William Walker/Black Racer is nothing less than Black Power on skis. 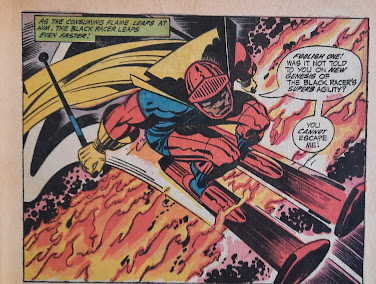 In New Gods # 3, published 50 years ago today, April 22, 1971, Kirby tackles two Sixties subjects which he has hinted at before in the Fourth World but never quite dealt with so directly, race and the Vietnam war. In doing so he uses his new character, the Black Racer, a kind of armoured knight, inter-galactic space slalom champion, surfing cosmic snow, as a metaphor for Black experience, reflecting the momentous journey from slavery to Sweetback, from subjugation to sovereignty. 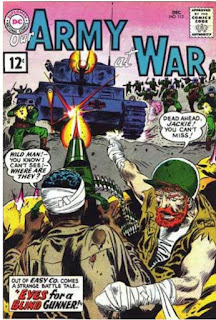 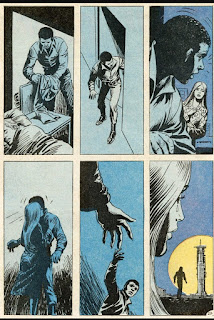 Like Vykin the Black in the Forever People, Kirby calls out the Black Racer’s identity by race. There is no White Light-Ray or Mono-cultural Metron equivalent. Partly this is because there were so few black characters at DC at the time, Kanigher’s Jackie Johnson and the Titans’ Mal Duncan are about all National/DC can muster up and even then, they seem bit part players. Kirby’s black characters are front and centre, they announce themselves as ‘Black’ and in this way reflect the growing pride and self-awareness of the black community at the time. ‘Say it loud, I’m Black and I’m proud!’ⁱ 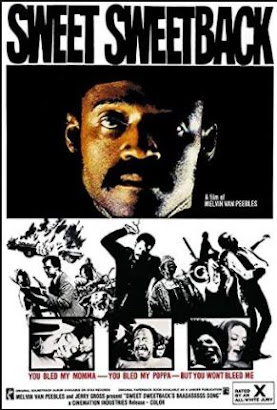 Kirby’s Black Racer would not be out of place in Melvin van Peeble’s Sweet Sweetback’s Baad Asssss Song, one of the first so-called ‘blaxploitation’ films, premiering on 31 March 1971 at the Grand Circus Theatre in Detroit. Three weeks later at the time of New Gods # 3’s release, Sweetback was well on the way to becoming the highest grossing independent film of 1971.²

Black audiences saw black actors leading on screen, not reduced to racial stereotypes or minor roles. Van Peebles made the case for black expression: " 'For me all the stuff has a direct arrow. I've always used my own voice.' As he sees it, each piece demonstrates his main purpose—to controvert 'false black images' whites use in America 'to confuse, drain and colonize our minds.' " ³ Black audiences cheered when Sweetback escaped white Police.⁴ 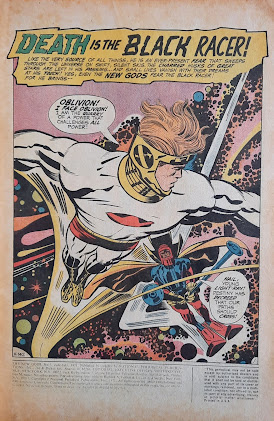 The Black Racer is not a subservient figure, he is the New God of Black Power. At first he is the God of Death, oblivion, a Killer Surfer, as he chases Light-Ray around the Universe in New Gods # 3’s opening panels, a race between the quick and the dead. The comic’s cover asks ‘Is he after Orion….or you?’ 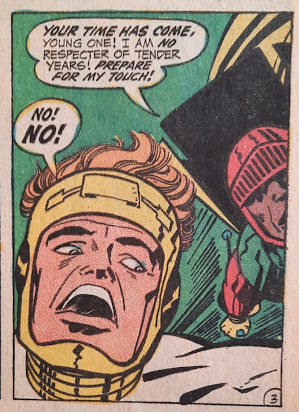 Like the air of apocalyptic, malevolent menace from the State, weighing on the minds of American male youth as they turned 18 and feared the draft to Vietnam, the blond, youthful Light-Ray cannot seem to escape the Black Racer’s death touch. The Black Racer is as ruthless as a local draft board or a Viet Cong bullet: “Your time has come, young one! I am no respecter of tender years! Prepare for my touch!’ Light-Ray is only saved by the intervention of Metron who sends the Racer to Earth via Boom Tube. 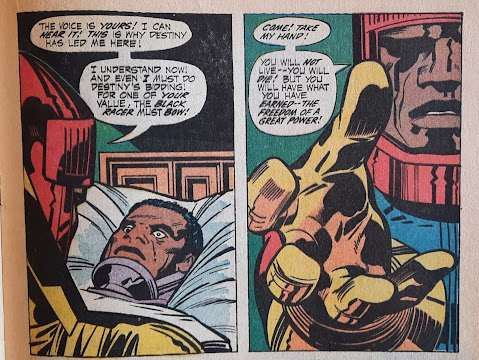 The Racer is transformed when he arrives. He sees black-on-black crime and then saves black Vietnam veteran Willie Walker from being shot by one of Intergang’s criminals. Willie feels like an image of historic black experience, flat on his back, crippled, with no voice, seemingly powerless. Like a black Jesus, the former Death Racer reaches out his hand in healing, saying, like an answer to prayer, ‘I hear a voice calling my name’, promising Willie ‘the freedom of a great power’ that will also cost him his life. 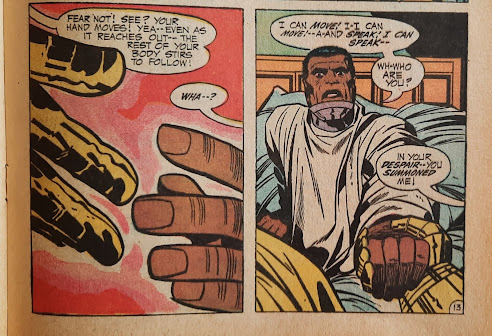 Like Lazarus, the Racer raises Willie from his bed and Willie sits up, he speaks, Black Movement, Black Voice. Then he stands, and like a former slave, he removes the yoke of his steel collar and evokes the spirit of the striking 1968 Memphis black sanitation workers, who wore placards saying ‘I Am a Man’. Willie says “I’m whole! I’m strong! I’m no longer half alive! Willie Walker no longer needs this aid!” Black Power. 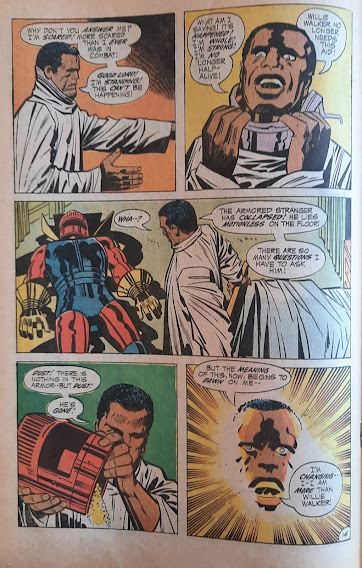 Willie looks for the Black Racer and sees only an empty cloak, like the white (now black) shroud at Jesus’s empty tomb. In that resurrection moment Willie and the spirit of the Black Racer merge, he is transformed from weakness to power, ‘I am the power to make all tremble! I am the Black Racer!’ 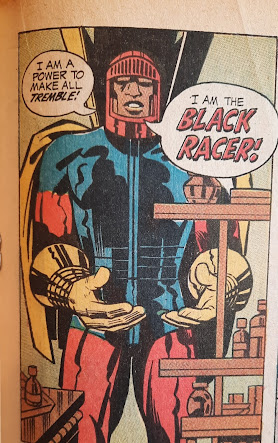 At this point, the Black Racer’s story becomes about his own autonomy, his own freedom, his own sovereignty and by extension, a commentary on the journey of black people at the time, a race for the same rights and privileges, the same treatment as the white majority. Similar to the Forever People’s pentavalent Infinity Man, the new Black Racer is a complex character. After dealing with the Intergang criminals he says ‘There are no more barriers for him now. Willie Walker now has the freedom of the farthest dimensions. Willie Walker is now one of many messengers. All who make the one entity, the Black Racer.’ The Racer and Willie split and Willie is back in his bed. 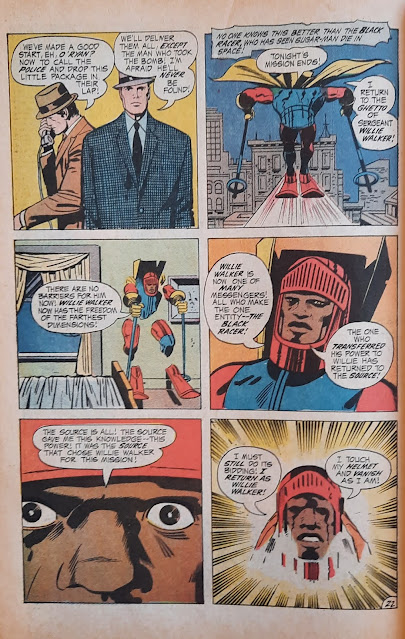 Echoing the Almighty, while the Black Racer takes life, he also gives it. It’s up to him to decide. Freedom now, with its own consequences. In life and in death. 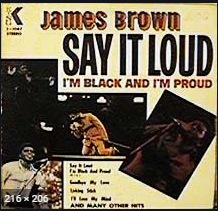 Uh, with your bad self

Look a'here, some people say we got a lot of malice
Some say it's a lotta nerve
I say we won't quit moving
Til we get what we deserve
We've been buked and we've been scourned
We've been treated bad, talked about
As just as sure as you're born
But just as sure as it take
Two eyes to make a pair, huh
Brother, we can't quit until we get our share

Michael Mead is a 54-year-old New Zealand comic book collector, who likes to think he can do "contextual" commentary reviews of old comics, asking: "where does this story come from?", looking at the social, political, cultural times it came from, the state of the comics industry, the personal and creative journey of the writer or artist, the personal journey of the reader as a child and as an adult.

As part of this, he is vain enough to think he can bring new insights into Kirby's Fourth World comics and so, on the 50th anniversary of publication of each issue of Superman's Pal Jimmy Olsen, Forever People, New Gods and Mister Miracle, he will publish a contextual commentary. Check out his earlier entries on this blog and tell him to stop talking so pretentiously in the third person for God's sake!

It would be tempting to simply see the Black Racer as Jack Kirby doing the Silver Surfer at DC but Vietnam veteran William Walker/Black Race...