See me, feel me, touch me, heal me 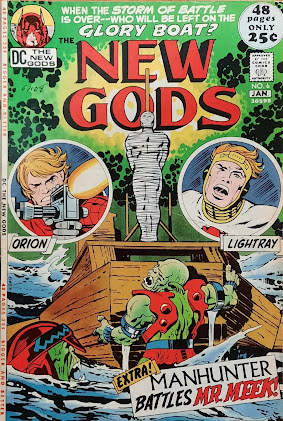 See my face, hear my calling. Forget your own past, let go of you, stop sending me messages. I am part of you but I am not the same. I have my own values and I fight for them. Let me show you, let me lead you into glory. 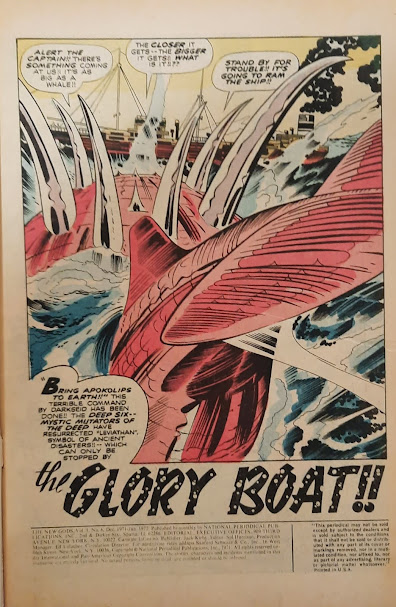 Jack Kirby’s New Gods # 6, (January, 1972), published 50 years ago today, 14 October, 1971, sounds a counter-cultural siren for a new way to tame the monsters of the deep, the raging ocean of Sixties voices, talking at each other, rather than listening to each other. In the character of Richard Sheridan, a conscientious objector, Kirby engages ever more directly with the culture, locates his heroes ever closer to the teenaged reader pondering how close he is to boarding a plane for Vietnam. 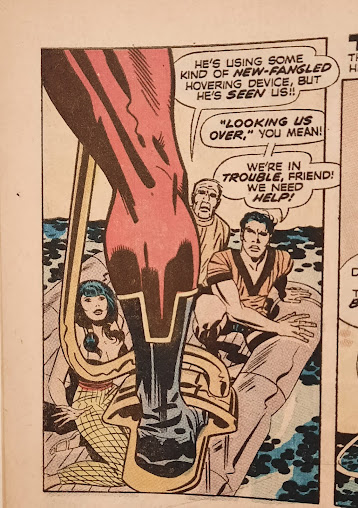 Like Moby Dick by Melville, Kirby’s tale (sorry, couldn’t resist!) is not primarily about the fish (mammal, thank you Jerry Seinfeld).¹ The giant leviathan, like a surging marine blood vessel, pulsing with Apokiliptian rage, represents the unavoidable, inevitable, unstoppable well of conflict, suppressed for so long, frothing over from the Jungian unconscious beneath the Sixties waves and surfacing in front of us, leaving us no choice but to face it. 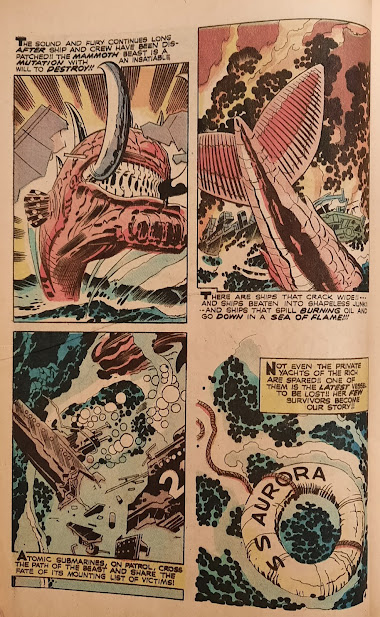 The war won’t go away in 1971 and whether you are a solider like Orion and Richard’s father Farley or a peaceful objector like Richard and Lightray, you must make a stand. Like the Weather Underground’s campaign to ‘bring the war home’², Kirby ‘brings Apokolips to Earth’ via Darkseid. Kirby’s inclusion of the real world, generational conflict that mattered most to youth and their parents in the pages of his comic book shrinks the distance between fantasy and reality because it’s too important not to be talked about. 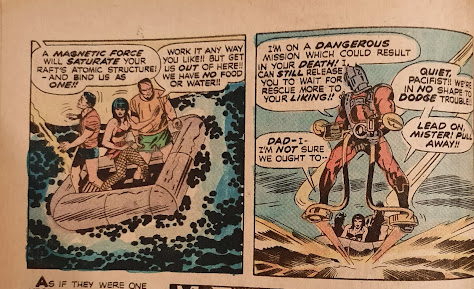 Through Richard Sheridan, Kirby seeks to humanise the actors in the pages of the newspaper and in the nightly news. The faceless, shrouded figure in bandages on the front cover, is someone. Not a ‘hippie’, not just another nameless soldier in a body bag, not a ‘fool’, not to be dismissed as a ‘pacifist’ who ‘dodges’ trouble (read: dodges the draft), not a ‘marshmallow’, not a ‘puppy’, not someone who will ‘never fight when duty demands it.’ 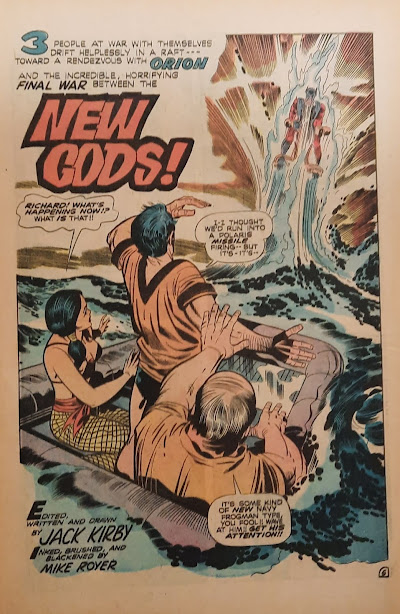 Shipwrecked by the leviathan, Richard, Farley and daughter Lynn are rescued by Orion who then liberates and re-meets Lightray, uncoiled from a Deep Six mummified trap. Orion, like Farley to Richard about Vietnam, is derisive of Lightray’s involvement in the war between Apokolips and New Genesis. 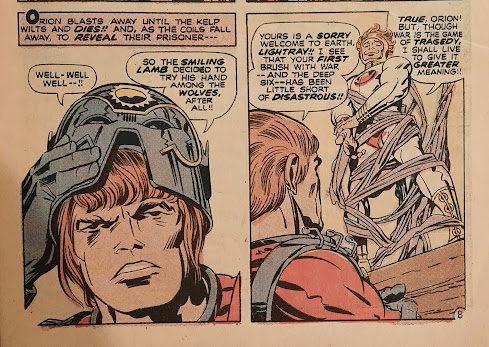 ‘So the smiling lamb decided to try his hand among the wolves after all!’ Lightray like Richard, has a message of transformation to retort Orion’s destructive snark: ‘…though war is the game of tragedy, I shall give it greater meaning.’ 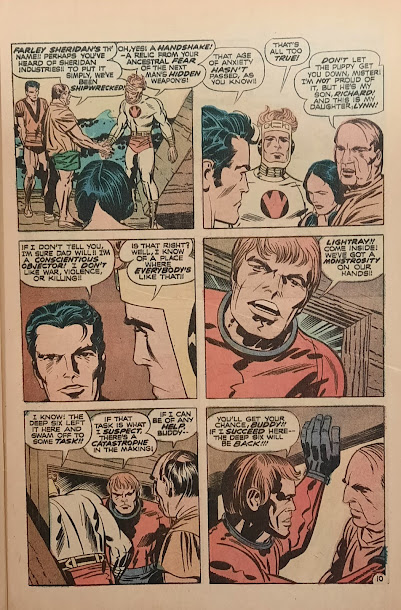 Richard meets Lightray and after enduring the endless, myopic jibes of his World War Two father, he says “I am a conscientious objector. I don’t like wars or killing.’ Lightray replies, ‘Is that right? Well I know a place where everybody’s like that.’ With a few typewritten strokes, Jack Kirby, who some think cannot write well, has connected with his youth readership and made them feel less alone at a time where it seemed the whole State was against them. 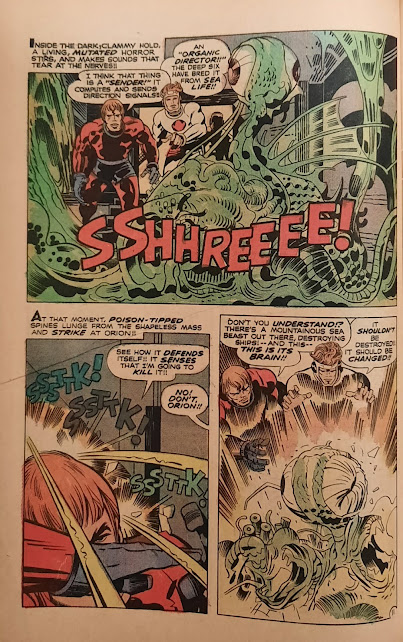 There is only one course open to all and that is to fight, in the way they each know how. Lightray locates the grotesque ‘sender’ the beast that directs the leviathan’s destruction. In a display akin to a religious conversion, he resists Orion’s call to kill the thing and instead transforms it into the ‘…more sophisticated, unified and techno-active caller.’ Evil is born again, called from fallen, one dimensional hate to multi-dimensional hope, strength, challenge, for a reckoning. 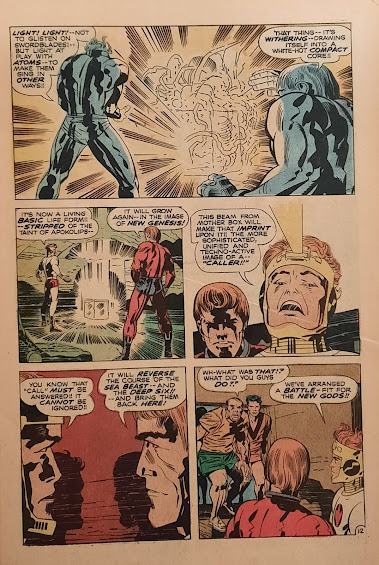 In this way the journey of Lightray and Orion parallels Richard and his father’s. As they learn more about each other, as they seek first to understand, they begin to respect each other more. Faced with the threat of the Deep Six’s Jaffar, it is Richard not his father who defends the family. 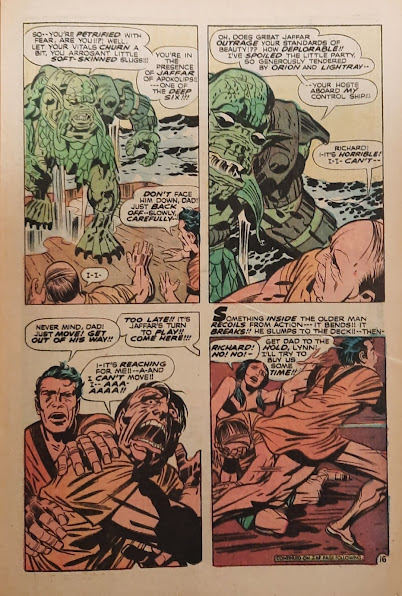 No conscie coward, Richard courageously throws himself at the monster and suffers death and dehumanisation as his reward, his face replaced by a blank mask, he becomes like an unknown solider, ’a faceless hero….this one shall go to the Source as one of us...’, representative of all the thousands who never came back. His example awakens his father who finds new strength for the fight. 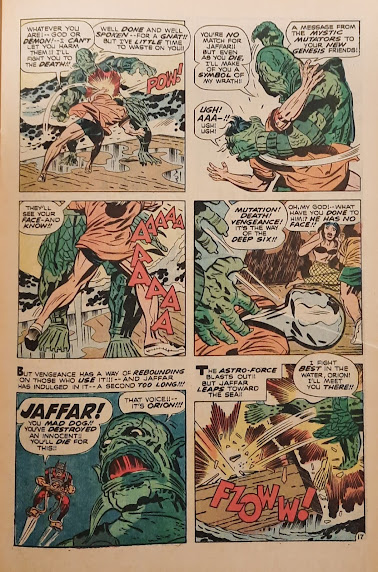 Orion then wipes out the Secret Six threat but like Richard and his father, it is the peacenik who now leads the battle, it is Lightray who commands but not in the way Orion expects. His first act is transcendent as perhaps by Mother Box’s spirit or Richard’s last remaining spark of life, his mask is removed and we see him again as he was. 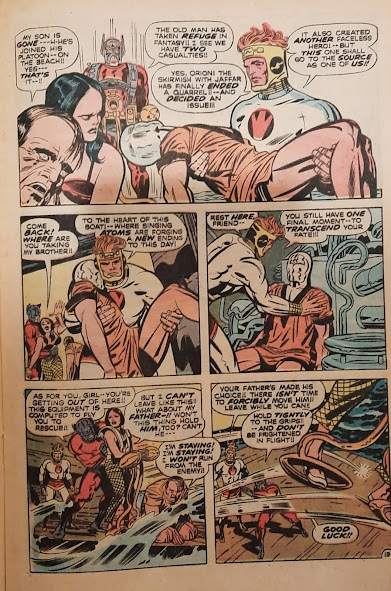 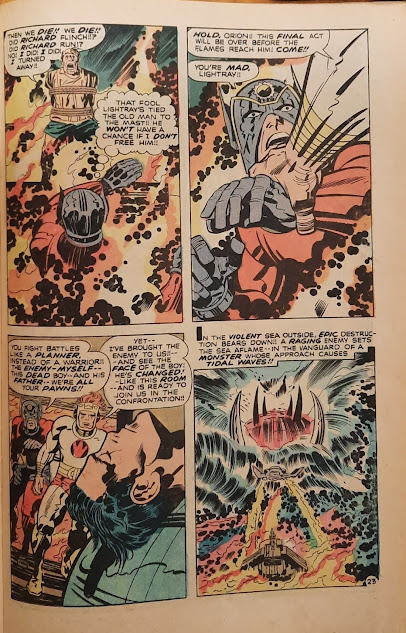 In an incredible two-page spread, Lightray reaps what he has sewn earlier inside the ship and the life cube is transformed into a ‘…glistening warhead…’, carrying the living ---the dead—and the fiery trumpets of the Source’. The Secret Six are blown to Biblical smithereens  and a ‘young man of conscience has chosen a warrior’s death.’ Lightray’s motivation is the same as Richard’s, he does not believe in war but he will fight for his family if they are threatened, he will risk his own life to save others: ‘If we must die, let New Genesis live!’ The last words of the issue come from Richard’s father who lives but has also been transformed. In his son’s actions and death he has truly seen him, felt a little of how he felt, listened, it has touched him, he is proud, he has got the story, he has seen the glory. 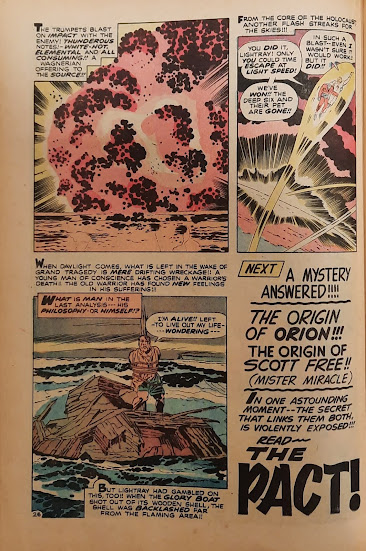 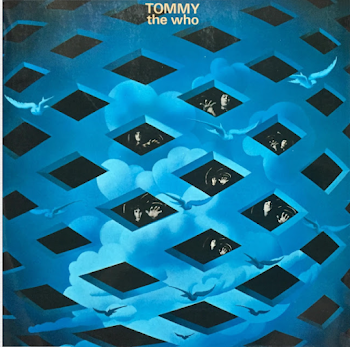 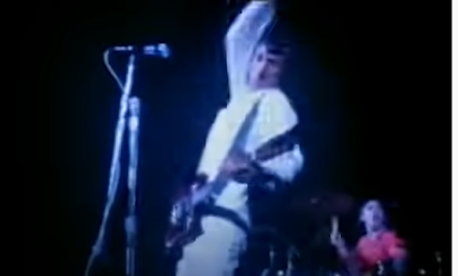 (See Me, Feel Me, by The Who from their 1969 album Tommy, released as single in September, 1970).
¹ In the Seinfeld episode,  'The Marine Biologist'  (season five, episode 14, 10 February, 1994) the character George Costanza fakes being a marine biologist to impress a woman he likes. His ruse begins to backfire when he is called to save a whale at a beach. Recounting the story he calls the whale a 'fish'. Jerry corrects him and says 'mammal.' George looks pained and replies 'whatever' and continues with his story.
² Sixties revolutionary group, The Weather Underground, wanted to 'bring the war home', show the violence that was happening in Vietnam to the insulated American public to help build public support against the war, by bombing American government buildings. Weather Underground member John Jacobs came up with the phrase.

As part of this, he is vain enough to think he can bring new insights into Kirby's Fourth World comics and so, on the 50th anniversary of publication of each issue of Superman's Pal Jimmy Olsen, Forever People, New Gods and Mister Miracle, he will publish a contextual commentary. This is his 27th of a projected 48 Fourth World commentaries (I’m more than halfway!:). Check out his earlier entries on this blog and tell him to stop talking so pretentiously in the third person for God's sake!

What if Jack Kirby deliberately wrote farce? What if he consciously chose to write silly dialogue, like no one else spoke just because he co... 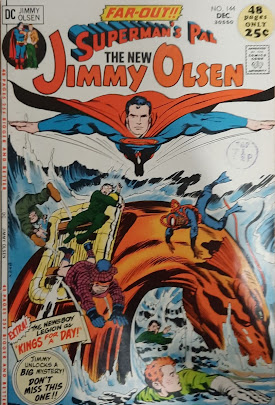