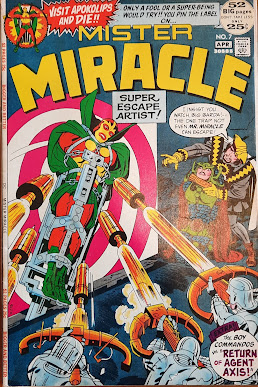 ‘Now only thing I did was wrong

Stayin' in the wilderness too long
Keep your eyes on the prize, hold on

The only thing we did was right
Was the day we started to fight
Keep your eyes on the prize, hold on’

(Eyes on the Prize as sung by Pete Seeger)

We run away from pain. Apokolips escapee Scott Free bathes in it. Why? In Mister Miracle # 7 (April, 1972), published 50 years ago today, 13 January, 1972, Jack Kirby continues to explore Scott’s origin, as Mister Miracle and Big Barda return to Granny Goodness’ terror orphanage on Apokolips to claim Scott’s freedom. To escape from pain is one thing, to stand free from it is quite another. 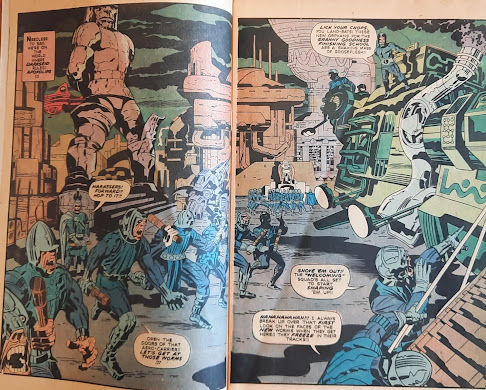 Scott Free as Mr Miracle willingly challenges death on Earth as an escape artist, using all the tools he learned in the hell of Apokolips. At first it’s how he survived as a child, escaping from his own body and the pain he felt from Granny’s torturers such as Hoogin the harasser, whom he re-meets in this issue.  Now it’s how he lives as an adult, escaping from traps, each escape a reaffirmation of his own journey. He won’t be put down, drowned out, his voice will be heard, he won’t be abused. He seeks to turn the pain he felt as a child into something transformative, serenity in the face of death. 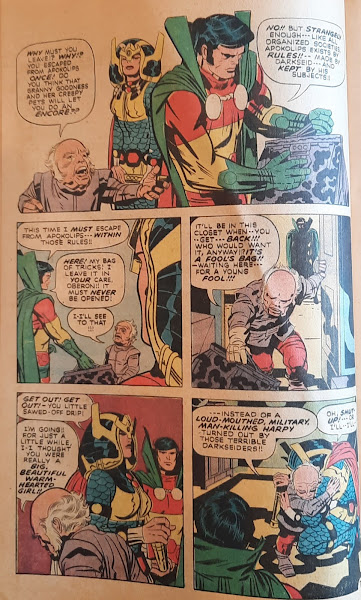 More than that, he realises the role he plays for others, the beaten down orphans who still remain in Granny’s ‘Happiness Home.’ They have succumbed to slogans, threats, despair and finally, most damningly, acceptance. Their minds, spirits, hearts have been colonised by anti-life, they are ground down until they believe the lies Darkseid and Granny tell them. Evil no longer has to work hard when people say out loud the words that put them in their place, without being forced to. They accept the distorted world as it has been told to them and see slavery, darkness, dictatorship, as truth. As Scott says in Mister Miracle # 1, ‘The trap is not in the chain—it is in the brain…’ 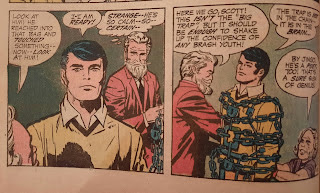 Scott brings hope to these desperate denizens of a foul world. As young Scott Free he battles para-demons and wins not through brawn but by outthinking them. Like the Civil Rights anthem, his passage out of despair begins when he refuses to accept how things are and seeks to change them: “…one thing we did right was the day we began to fight, keep your eyes on the prize…” 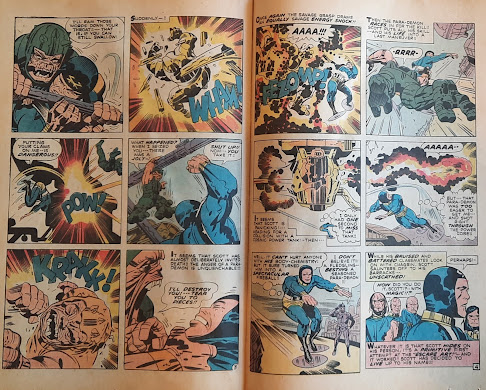 So against Oberon’s advice Scott goes back to Apokolips, not just to fight but so that downtrodden people can see that their lives can be transformed: ‘Living or dead, you and I are proof to all of Apokolips --- that it can fall!’ Scott is like a suffering servant, someone who will take pain for others so that they can see a different way of being. 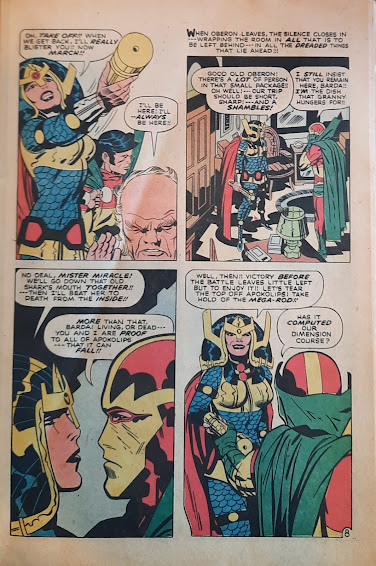 Scott is not yet aware that he was allowed to escape from Apokolips or the role that plays in Darkseid breaking the pact between New Genesis and Apokolips (see New Gods # 7). Yet that does not change his desire to be free, freedom from evil not just the freedom to leave it unchallenged. He cannot hide from evil, he must confront it. 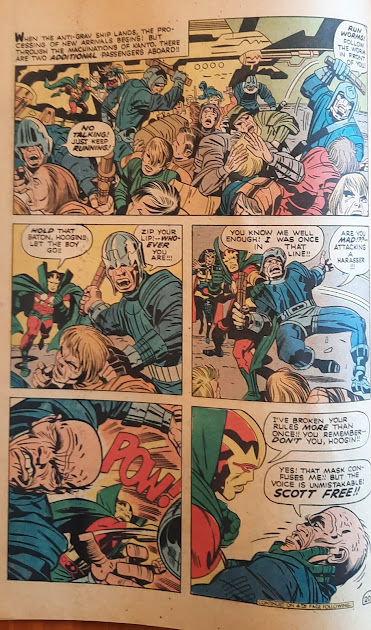 In a powerful moment, Scott steps in to save a boy orphan, faces down his own abuser Hoogin and lets him have it: ‘I’ve broken your rules more than once! You remember—don’t you Hoogin!....Tell Granny that I’m back. Tell Granny I claim freedom, by right of combat!’ You’re never free of someone who has had power over you until you show them you’ve risen above them. 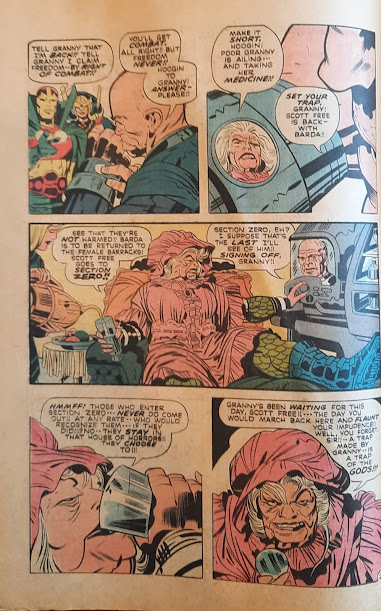 Granny, in her disturbing combination of old lady nightie and reptilian battle dress, decides to set Scott’s challenge as ‘section zero’. She hints that this battleground is not a just a physical fight but a psychological breaking of the spirit: ‘….those who enter section zero—never do come out…no, they stay in that house of horrors. They chose to.’ 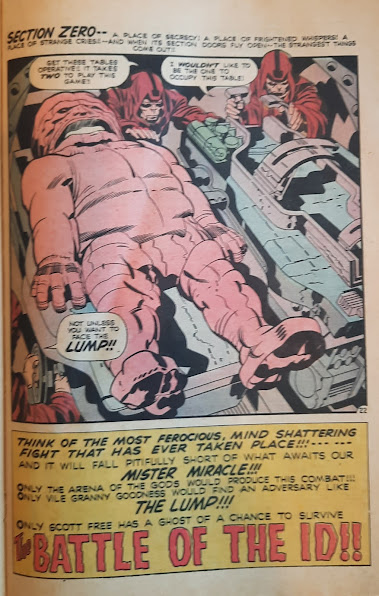 Lumpen anti-life awaits Scott Free. His freedom ride back to Apokolips, a willing decent into hell to liberate himself and others, there is no peace without justice for Scott Free. Keep your eyes on the prize, hold on. 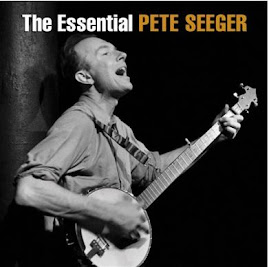 ‘The very moment I thought I was lost, the dungeons shook and the chains fell off, keep your eyes on the prize, hold on.’

As part of this, he is vain enough to think he can bring new insights into Kirby's Fourth World comics and so, on the 50th anniversary of publication of each issue of Superman's Pal Jimmy Olsen, Forever People, New Gods and Mister Miracle, he will publish a contextual commentary. This is his 35th of a projected 48 Fourth World commentaries. Check out his earlier entries on this blog and tell him to stop talking so pretentiously in the third person for God's sake!

‘Now only thing I did was wrong Stayin' in the wilderness too long Keep your eyes on the prize, hold on The only thing we did was ri...